“Today there are at least an estimated 3.5 million Americans of Arabic-speaking descent, and they live in all fifty states. […] The purpose of this book isn’t to separate them out but to fold their experience into the mosaic of American history and deepen our understanding of who we Americans are.” p. xi

A walk through American history through the lives of a wide variety of Arab-Americans. 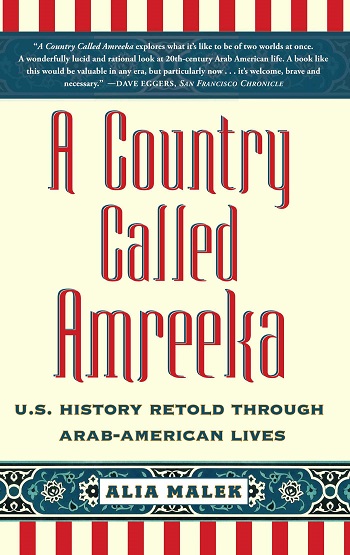 I picked this book up on a whim, but it turned out to be very interesting nonetheless.  Mostly, I wanted to know why America was misspelled in the title (Amreeka is the Arabic word for America), and after looking at the blurb, I thought this could be an interesting perspective on American history which I personally had not very much considered before.

Much like Prisoners Without Trial, this book opened my eyes to another important part of American history.  Similar to that book, this one also deals with a limited time period, since immigration laws prevented large numbers of Arab immigrants prior to the 1960s.  However, Malek tells her story in a very different (although just as engaging) way.

After a brief forward explaining the background, format and scope of the book, she takes snapshots from various Arab-American lives and uses them to illustrate a wide variety of experiences and time periods.  In between these vignettes are brief chapters that give immigration statistics, updates on legal and cultural developments, and information about world politics that had bearing on Arab-American lives.

I was wary of this technique but soon found it engaging.  This book was perfect for my style of lunchtime reading as it felt more like a collection of short stories than a historical tome.  However, the bridge narration between the chapters was crucial for giving a greater understanding of the context of each chapter as well as linking all of the disparate stories into a narration about Arab-Americans as a whole.

Malek represented an incredible variety of Arab-Americans.  Beyond simply including both immigrants and descendants of immigrants, she also includes Christians, Muslims, non-Arabic-speakers, refugees, wealthy and lower-class, and people from a wide variety of ethnic/cultural backgrounds.  One character is a pharmacist struggling with his sexual identity, another a football player carefully straddling the line between white and black in 1948 Birmingham.  As a Midwesterner, I also greatly appreciated that she was careful to include people from all over the continental United States.

The only chapter I felt struggled with this need to include multiple viewpoints was Courted, which dealt with the inclusion of Arab-American and Muslim political groups in the 2000 election.  While all of the other chapters dealt with a single character or a family group, this one bounced back and forth between a Democrat and Republican both working in politics at the time.  It was harder to follow and less interesting to me personally.  However, based on the conclusion and next two chapters, I understand why she felt that this was an important story to include, and haven’t been able to come up with an appropriate suggestion for changing it.

Marek casually informs about a number of issues, such as Palestine, how Sikhs were mistaken for Muslims and violently targeted post-9/11, the differences between Arabic groups and Muslim groups, and how the various waves of immigration affected both America and the incoming new citizens.  Because most of these are tied to specific people’s stories, they are more memorable.  It was cleverly done.

Several stories were quite moving, such as the Arab-American soldier sent to fight in the Iraq war, who finds himself a translator stuck between two cultures.  About halfway through the book, I found myself wishing that Malek had included follow-ups on the various characters, only to finish the book and find concluding paragraphs for all of the stories.

This book is intended for adults, but could be used by teens.  Sensitive readers should be aware that violence, both abroad and in America, is frequently described.  Characters die, are beaten, or witness horrific acts.  There were significant swears and racial slurs used, although how much depends on the chapter and the character featured.  Each chapter truly drops us into the world of that person.  For example, the chapter about a Marionite priest confronting 9/11 is very clean and could potentially be read to much younger kids.  The in-between synopses could also be used with a wider variety of ages.

I’d recommend this book to all Americans.  It may also be of interest to others in the Arabic/Muslim diaspora or people who are interested in reading about immigration and assimilation.  A great primer on Arab-American history, very readable.