Brian Pinkney tackles bravery and Tae Kwon Do in this picture book about a girl with two big problems.

JoJo’s happy living with her mother and grandfather and practicing Tae Kwon Do with her friends.  But she has two big problems.  The first is the scary tree at the end of her driveway, and the second is her yellow belt test, where she needs to break a board with her foot. 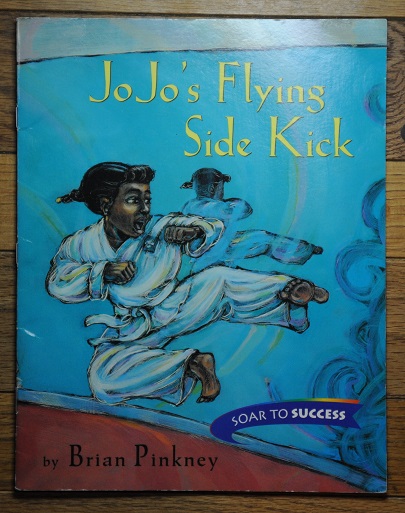 Pretty much I have the whole Pinkney family on auto-buy because there hasn’t been one of their books I’ve disliked yet.  They are usually a hit with students as well.  This is not the most popular one but a very solid addition to the Pinkney canon.

END_OF_DOCUMENT_TOKEN_TO_BE_REPLACED

This book I got from the library (SM) as I found the back matter intriguing.  It focuses on ten year old Brendan Buckley over the summer between fifth and sixth grade.  Only child Brendan’s Grandpa Clem has just passed away, his father is busy working as a police detective, and he plans on spending the summer hanging out with his best friend Khalfani, practicing Tae Kwan Do, and learning more about science.  When his mom isn’t making him go to the mall with Grandma Gladys, that is.

On one of those mall trips, he wanders into a display of the local rock club and can’t wait to sign up. But his grandma sees him talking to the club president and drags him away – it’s his grandpa DeBose, whom he’s never met.

So now Brendan has a lot of questions.  Why has he never met his white grandfather?  Who is this guy?  And what does it mean that he is mixed?  What will it mean to look black as he grows up?