Despite a few flaws, this surprisingly informative A-to-Z book is highly recommended for families and teachers.

This is one of the core texts I used for the 30 day project.  Although I was familiar with Sleeping Bear Press from their lovely state books, I wasn’t familiar with this title until I came across it at my local used bookstore.  (Remember when I started to be known as that lady who buys up all the diverse books?  This goes back to my first trip.)

As soon as I saw it, I knew it was the perfect complement to 28 Days, with the only difficulty being 26 letters in the alphabet and 28 (really 29) days in the Smith book.  I got around that by combining some days and finagling so that some topics aligned.

As with all Sleeping Bear Press books I’ve seen so far, I found this book absolutely lovely.  Each letter has either a full page or a two page spread.  There is a short couplet including the featured letter or word.  This couplet is found amidst the illustration, then off to one side the letter is repeated in both upper and lower case along with at least two paragraphs giving further information about the topic and people associated with it.

There was a wide variety of topics and historical figures covered, including several I was not yet familiar with.  As soon as the third page, I was learning about the Buffalo Soldiers and cowboys on the western frontier.  Although one would think that the alphabet format would be limiting, since the topics were general and the paragraphs covered a wide range of people, there was a surprisingly large amount of information presented.

While this book is not quite as versatile as 28 Days, it is another great choice for a 30 day project.  I think this one would be a particularly good choice for schools, since classrooms would not be doing a day on the weekends.  For example, in 2017 there will be 20 weekdays in February.  There are 18 two-page spreads in the book.  That leaves two days for introducing and concluding the project, or to accommodate any days off your school might have.  This book lends itself to combining with coloring pages and picture books, although you might have to include a few historical fiction picture books in order to cover some of the more obscure topics.

Off the top of my head, there are several other ideas that could be used with this book for older children: Students could each learn one of the short poems and recite them in a skit for other classes.  Individual students or teams could be assigned to learn more about topics or to read an outside book and write a report or present to the class (easy to differentiate by the materials available and difficulty of topic).  The original publisher also has a teacher’s guide which might be helpful. 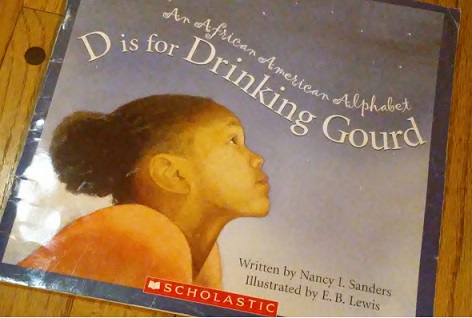 The children generally enjoyed this book.  They personally found the alphabet format more understandable and relatable than the timeline version.  However, they did not like the illustrations as much.  They felt that the illustrations were darker and it was harder to understand what some of them were depicting, and I have to agree with them.  While I found them appealing, in some it was difficult to know which, if any of the people from the informative paragraphs was shown in the illustration.  This was particularly obvious in comparison to the lively illustrations by Shane W. Evans.  My feeling was that the illustrations by Lewis were calmer and more relaxing, but this didn’t translate for the children.

There was one moment during the reading where we were thrown for a loop.  The Politicians page does mention Barack Obama, but does not have him listed as president, and his picture is not featured.  I was a little surprised until we looked at the copyright date – 2007.  I can only assume that more current editions have updated this page.

I was a little iffy on the letter Q which stood for quilt.  One of the informational paragraphs stated “quilts may have been used to help slaves escaping north along the Underground Railroad.  A quilt hung on a porch rail might be a signal that the house was a safe place to stop.”  While it does use the words “may” and “might,” it doesn’t reflect the reality that, despite this lesson being taught in many classrooms even now, this myth was a complete fabrication.  I felt like those two (out of eight total) sentences could have been more productively used to add more information about Harriet Powers or Faith Ringgold or to provide information about how quilts were made or used.

Some people may also be bothered by the religious references in Z, so be aware of your context and whether it is appropriate to read about the influence of religion on African-American history.  The Nation of Islam also gets a brief mention on the Malcolm X page.

Overall, this is a great book for families or particularly teachers of about 1st to 6th grade (depending heavily on the maturity and background knowledge of students, and whether it will be read independently or out loud, etc.).