“Though the distance from cabin to gangplank wasn’t more than twenty feet, I was protective of the ship. Slate had told me from a very young age not to talk to strangers about Navigation.” page 168

Nix’s father is a Navigator who can travel to any place, real or imagined as long as he has a map for it, but he’s only obsessed with getting back to the one place he cannot reach – 1868 Honolulu, where Nix’s mother died. 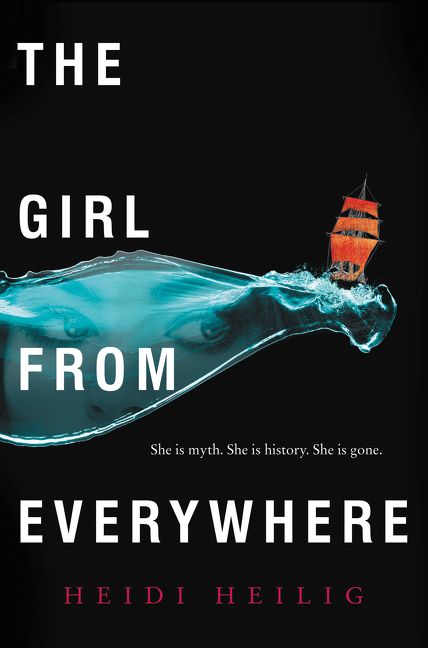 Now having read this book, I can finally fully appreciate why all of the reviews were so maddeningly vague.  This is, unfortunately, the type of book that you can’t discuss with any real depth unless you’ve read it, because to discuss anything interesting is to give away part of the action.

So I apologize in advance that you might find this review to also be maddeningly vague.  In a book where the majority of the setting and even the time frequently changes (and further changes amongst real and imagined places), the focus is rather on both the characterization and the action.  Both are fast-paced!

The main characters are, of course, Nix and her father.  Nix is bi-racial – her mother was Chinese and her father I think we can presume is white.  He’s from New York, present day, although he spends most of his time in the past.  But the rest of their crew is interesting too.  Kashmir is the most recent addition, a charming thief from an Arabian-Nights sort of world.

Bee is a bit confusing if you look at her too closely.  The text explains most fully on page 54:

“Bee was Na’ath, from a tribe in Northern Africa where cattle were both kith and currency.  Ayen was her wife who’d been killed years ago, before Bee had come to the ship.  But in accordance with their beliefs about death, Ayen was still with her, doing those little annoying things ghost wives do”

However, searching variations of Na’ath turns up a two things – a reference to Game of Thrones or a tribe that is decidedly not in Northern Africa.  It’s not entirely clear where Bee was picked up or how fictional she is.

Rotgut, the other longstanding crew member, is another mystery.  There are many references to his love of food and ability to cook, and a few to his being a monk.  His name initially led me to feel he was a former European monk, but later references point to him actually being a type of Buddhist monk.  He’s probably the least developed of the crew, although he has a small arc.

The main story focuses on the clash between Slate and his daughter Nix.  But also colonialism.   But also racial, cultural, social, and historical assumptions people make about each other.  With some cartography, more clever references than any one person could possibly figure out, and a bit of coming-of-age.

Aghhh this is an incredibly difficult novel to describe, especially while trying to avoid spoilers.  Suffice it to say that while I expected the father-daughter relationship to draw me in, I didn’t realize the level to which this book would deal with international US/Hawaiian/Chinese politics and Hawaiian history.  Both felt incredibly real and accurate to me, even though I knew the former were fictional characters, and the later was alternate history based on real facts.

I was a bit surprised though that there was another element of the plot which felt fairly obvious to me, that was not revealed in this book.  Perhaps it will come about in the next one, or perhaps I am entirely wrong about what’s going on.

It is fascinating how all these disparate characters have been brought together over time and space.  Heilig has also managed to do a clever thing as an author – she’s left herself an out.  In a time when new books are being canceled for poor representation, errors or stereotypes in hers can be shaken off as a clever representation of the fictional nature of that character.

The book did leave me with one problem though – how to classify it?  I’ve chosen to label it both fantasy and science fiction as technically alternate histories and time travel usually fall on the sci-fi side, but this incorporates mythological creatures and places and has more of a fantasy feel to it.

Does have some swearing, many references to drug use (generally seen in a negative light, but not always), violence, theft, political meddling, racial slurs, and relatively mild physical romance.  Overall, I wouldn’t suggest it for children younger than teens.

For older teens and adults though, definitely recommended.