“I have to suck up as much pride and dignity as I can while it’s there for me.” page 200

Sharon Draper detours from her usual realistic fiction for a historical novel set in 1957 during school integration at Little Rock. 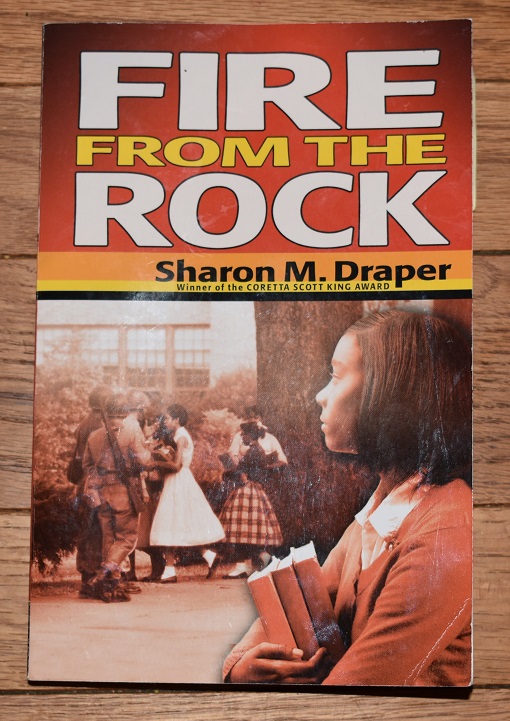 The novel opens with a bang as a white man’s vicious dog is turned loose on Sylvia’s 8-year old sister.  Several incidents throughout give a realistic portrayal of what it was like to live during that time period.  For example, although Sylvia takes great pride in her mother’s sewing ability, it’s also a practical necessity since she explains that at the time only white people were allowed to try on clothes in department stores or return them if they didn’t fit.  The nature of historical fiction also makes these glimpses more interesting and memorable to the reader than say, a textbook.  I think this book would work well in a high school history course.

There is a religious component to this novel.  Sylvia’s mother is a Christian who believes that black people should patiently bear injustice until the Lord brings about change, and her father is a preacher who’s learned to pray his rage at injustice away.  Their three children are also religious, but have a very different attitude toward integration.  Sylvia even has a white Jewish friend, and at points Draper explores the curious boundary where friend Rachel is both white and still an outsider, at times subject to similar prejudices and occupying a tense middle ground between white and black.

Draper has an unusual but clever conceit for this book – Sylvia is a student eligible by age, ability, and bearing to integrate the Little Rock high schools.  (Perhaps a mild spoiler, but if you’ve studied the time, you already know she was not ultimately part of the Little Rock Nine.)  Her older brother is the right age, but his fiery temperament disqualified him.

The book alternates between scenes and diary-style entries, but the later feel a bit forced.  It’s difficult to identify exactly what is off about this book.  Especially in comparison to Draper’s other books, Fire from the Rock frequently seems to be trying too hard, and is consequentially less engaging.  There is plenty of action though, and a few twists that might surprise you.

Romance is involved but since Sylvia is a 1950’s preacher’s kid, it doesn’t go very far.  I appreciated that since it can be difficult to find books for asexual, modest, or sheltered teens.  She learns both lessons about how to “catch a man” from her more experienced friends and also wisdom about true love from her mother.  Revealing clothes are used as a shorthand for a particular character and several women make judgmental statements about her.

Violence also comes into play and several distressing but all too realistic events occur.  More and more I’m coming to appreciate authors who can walk that thin but difficult line in diverse historical fiction – not glorifying the past nor downplaying the facts, but still managing to find hope and not terrifying young people either.  (Because let’s be honest, slavery was terrifying.  So were the acts of racial terror that followed in the Jim Crow era.  So are many things that happen today.  But sheer terror can freeze a person and young people need to be ready to act.)

My very favorite part of this was that a loving family with caring and involved parents was portrayed.  Of course there are many different types of families, but it feels unusual to read a book about an intact African-American family.  Sylvia might be making different choices than her parents would sometimes, but she’s not in a rebellious war, and neither side is being unreasonable.  Her relationships with siblings feel normal too.  It’s important to me that our children see some positive family interactions as well as dysfunctional literary families.  While Sylvia’s parents tell her to turn the rock and roll music down, they also support her and protect her as best they can, and she’s able to lean in to that comfort when times get tough.

Overall, I did enjoy this novel and it covers an important niche.  Perhaps just part of my overall feelings about historical fiction (still not my favorite genre), but I prefer Draper’s other books, and I’m glad she’s returned to realistic fiction.  Not a must-read, but I’d still recommend this, especially for history teachers or library collections.