Worm loves Worm.  So Worm proposes.  They want to be married.  But then Cricket and Beetle and the rest all have their own ideas about what a wedding should look like.  Will Worm and Worm ever be able to just be married? 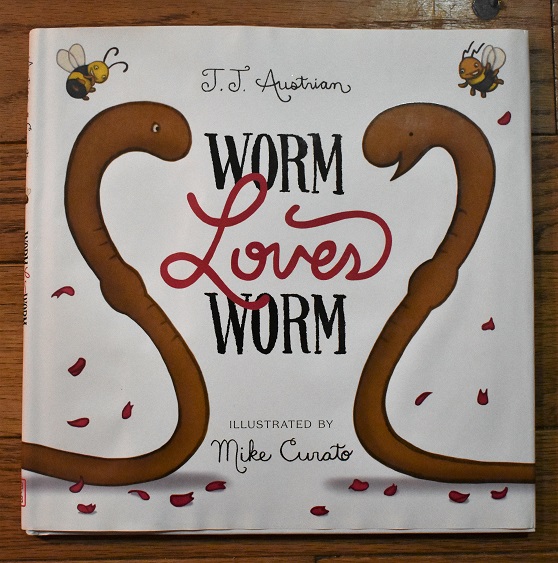 This book got a lot of attention while marriage equality was still in the news, but the buzz has died down.  Although immigration has replaced marriage equality as the hot topic of the moment, Worm Loves Worm is still a valuable addition to your library.

Curato’s illustrations are adorable and the simple but colorful drawings are perfect for engaging young readers.  The text is appropriate for the intended readers with nice large black text on a white background.  Some words are difficult (tuxedo) but it’s fairly easy and has lots of repetition for early readers.  Although the text is repetitive, since the book is nicely laid out and the illustrations are so appealing, it doesn’t feel as awkward or irritating as some other early reader books.

There were some differences in this book between how our family’s culture celebrates marriage and how it was described.  But I found this to be a great method of starting discussion with our children about different marriage traditions around the world and across different religious beliefs as well.  If your culture does not use wedding rings or the groom wearing a suit/bride wearing a white dress then you might have to explain those meanings to the children.

For very sensitive children there is a moment when Spider says “I can eat the cake along with Cricket and Beetle.”  Of course this could be interpreted two different ways, either as Spider sharing the cake with them or as Spider eating them and the cake.  The other characters do look a bit alarmed, and this tension is not relieved.

Otherwise this book was fine for young readers.  If you are a parent or teacher who likes to use voices this has a lot of dialogue!  The “bride’s bees” in particular were fun to do voices for when reading out loud.  Since most of the text was in dialogue, this would also be a fun one for a reader’s theater productions.

One of my favorite parts in this book is that it emphasizes the two sides to a wedding, although interestingly the term wedding is never used in the text.  The ceremony is about celebrating a couple and honoring their commitment to each other and forming a life and family together.  However I’ve noticed that American weddings have taken a very selfish turn where the focus is so intently on the bride and groom’s precise wishes that it doesn’t matter if everyone else is miserable.

This book does a great job of showing the balance.  Worm and Worm don’t compromise who they are or their core values, but their friends and family want to be included, so they expand their wedding to include loved ones, even the things that will make their loved ones happy that they don’t care about.  After all, married life doesn’t happen in isolation but within a larger extended family, community, and circle of friends.

It was interesting reading a book in which two (non-twin) characters intentionally have the same name and look the same.  Over the course of the story we do get some idea that there are two distinct personalities but it’s never entirely clear who is speaking (Worm or Worm?) so we don’t have that separation.  Austrian and Curato do a good job meeting this challenge.  The worms are themselves and express their personalities throughout, but there isn’t anything that a reader could inadvertently hook a gender on.

While I don’t think this was the original intention when it was published, this book could also stand for genderqueer or agender individuals as a children’s book representation.

Oh, and check out the illustrator’s website for a coloring sheet with all the characters, a sneak peek at the book, and some posts he wrote about the experience of working on this book and reception of it.