In November 2013, two teens were on the same bus for just eight minutes.  Agender senior Sasha fell asleep on the long ride home from fir small private school.  Sixteen-year-old Richard was joking with friends as he left his large public school.  Then Richard held a lighter to Sasha’s skirt, forever changing the course of both their lives. 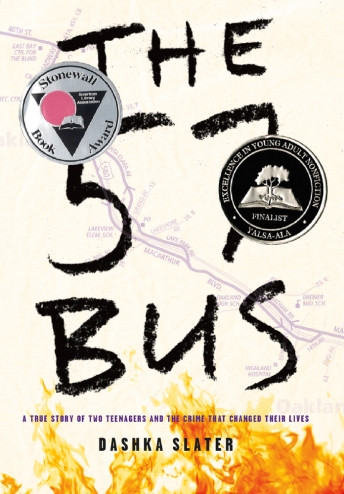 This unique, well-written exploration of one particular incident evokes much more.  Richard’s struggling (but loving) young mother took in two nieces after her sister was murdered.  He grew up in a rough neighborhood, where 4 of his close friends and family members had been murdered before he was 16, and he was mugged at gunpoint only a week before the fire.  And Richard was African-American, possibly ADHD, and definitely traumatized.  He spent time in a group home because of fights before, but didn’t start them – he was a follower.

Sasha is white, middle class, an only child who had struggled with fitting in before – autistic and agender, with a major passion for public transport.  Fi is shy, so fir parents were surprised when fi started wearing skirts.  However, they took great joy in seeing the child a psychiatrist told them to lower their hopes for blossoming into a confident, thoughtful teen.

The book breaks down into four parts after a quick into about the fire and the city of Oakland.  Part one tells a little bit about Sasha’s life before the accident and fir friends, as well as introducing us to a variety of gender terms and conditions.  I liked that Slater also talked about asexuality and aromance as well as agender and transgender.  Meanings and terms are explained, and Slater explains that terminology changes and some people may prefer different words, so ask.

The next part is about Richard’s life before, his friends and family.  I was surprised this book includes poetry.  Both sections start with a poem drawn from the teen’s social media presence, and have another poem near the end.  Other poems are scattered throughout the book.  While the page count might seem daunting, the chapters are fairly short (some are just one or two pages) and the poems only take up part of the page.  I read this in just two days.

Part three goes into the incident itself, and flips between viewpoints every few pages.  It reads like gripping fiction.  We know what will happen but can’t look away.  The second two parts occasionally explore viewpoints beyond the two teens.

Part four, Justice, deals with the aftermath – Sasha’s hospital stay, Richard’s journey through the criminal justice system.  The interactions between their family and friends, the reactions their respective school communities had, and the tendency of so many people to lionize Sasha and demonize Richard in a way that neither wanted.  Richard finds himself drawn back to his Christian faith after the fire, and this is also represented.

All along, questions lurk just beneath the surface – Was this a hate crime? How did Richard’s life before impact what happened?  Could it have been prevented?  What will happen next?  Can Sasha heal?  Does Richard deserve to be tried as an adult due to the severity of the crime?  And at the end, was justice served?

Obviously, there is violence.  The main incident is described in detail, and others are described or referred to throughout the book.  Significant but not gratuitous swears.  No sexual references beyond the discussions of bisexual/homosexual/etc.

This book might be appropriate for some middle schools, and should be fine for teen readers.  If they can handle the violence and cussing, even younger children might be able to read it with parents.  This was a fascinating read, and I can only imagine the intense discussion this could spark among teens or adults in a book group or classroom.  It provides many avenues for approach by LGBTQ, POC, religious, or disabled people – everyone is sure to identify with one of the characters in some way.

The nuance and sensitivity with which Slater handled this story is remarkable.  She might in one chapter seem to be on Sasha’s side, but in the next she is giving us Richard’s part.  Her careful writing allows us to see both sides and care about all of these characters.  Not only an interesting book, but also one to make you think.  Highly recommended.

(P.S.: You can read Slater’s article, but I recommend jumping straight into the book instead.  It will feel fresher and unfolds better in the longer form.)