“By now the name of the cafe was written on the walls of hundreds of boxcars, from Seattle to Florida.” page 30

This is going to be a complicated review.  There are two main threads to the storyline, which covers events in the fictional town of Whistle Stop, Alabama (just outside of Birmingham) between the early 1920s and the late 1980s. 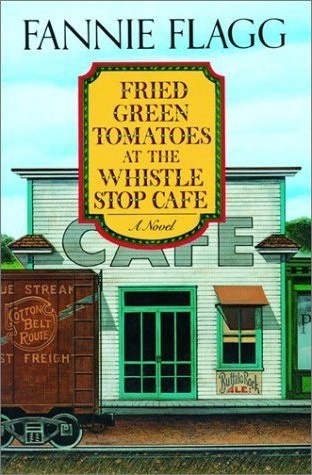 The story is told through four different elements.  Evelyn Couch is struggling with her weight, her marriage, menopause, and an inevitable feeling of doom.  She accompanies her husband on visits to his mother’s nursing home every Sunday, but can’t stand to sit and watch TV, so she finds herself in the visitor’s room with Ninny Threadgoode.  At first she just wishes the old lady would shut up so she can eat her candy bars in peace, but then she gets interested in the stories and they forge an unlikely friendship.  When the novel was first published, these scenes would have been roughly contemporary – it’s now historical fiction.

Once we as readers, like Evelyn Couch, have gotten interested in Ninny’s stories, then we start to have scenes which take place in the past with the characters she mentions.  The majority take place in Whistle Stop, but many also occur in Birmingham, or anywhere else main characters happen to go.  The fourth element consists of other news articles or clippings from places beyond Whistle Stop.  These also tend to be brief and always follow events connected to main characters.

While The Weems Weekly and nursing homes scenes follow a chronological order, other elements follow the order what Ninny says and give more depth and backstory.  They do follow a narrative arc, with the larger overarching story being an unsolved murder, but with many smaller and more interesting story arcs within that frame.

One might think Ninny Threadgoode is the main character.  However she is only a backdrop to the adventures of Idgie Threadgoode (and later Ruth Jamison).  Even when we eventually learn her greatest sorrow (and deepest joy), she’s explicitly present only in a few of the past scenes.  Ninny is happy to live vicariously through others – whether exciting figures of her past, more active denizens of the nursing home, or even Evelyn Couch.

There are two major diverse elements.  One is the love story between two women.  I’m told that the movie leaves their relationship open to interpretation.  The book is very clear that they are in love and physically attracted.  Although the rep isn’t great, there is also a bisexual character.

The second overtly diverse element is the inclusion of African-American characters.  Specifically, the novel loosely follows the life of one black family who work for the Threadgoode family.  Idgie’s choices end up having an impact on this family also.

Flagg devotes far less time to her black characters, and doesn’t delve into their viewpoint.  There are interesting moments, such as the scene between Clarissa and Artis.  But racist language is used, KKK members are portrayed as “just one of the boys,” and the mythology of subservient black people is never really upended.  I found this element of the book hard to read.

This is a difficult novel to discuss.  It’s a classic of lesbian literature for good reason.  But it is also a novel by a white woman set in the Jim Crow South, which caricatures black characters, appropriates their culture, and uses racist language without calling it out.

Lots of trigger warnings for this one.  There’s murder, attempted murder, rape and attempted rape, racism of many varieties, sexism, limb loss, inappropriate language, infidelity, lesbian romance, cancer, suicidal idealizations, the KKK, a car accident, wrongful imprisonment, and probably others I’ve forgotten.  Some are described graphically, others only mentioned in passing.

While the book felt racist to me, I’m inclined to give more leeway to older books that attempt to tackle race.  This isn’t one I think should be studied in high schools, but it also isn’t one I’m ready to strike off of adult reading lists entirely.

Beyond the two main minority points, there are some others.  Two major characters are adopted.  Some characters are disabled.  Flagg deals with physical disability nicely, but doesn’t handle mental disabilities well.  One character is suicidal and that is described quite vividly, as are another character’s suicide threats.

Despite the positive lesbian portrayals, I cannot generally recommend it.  It may still be of interest to those looking for lesbian historical fiction, Southern fiction, unusual narrative structures, or early portrayals of race.