“Today, with the twins having rejoined each other on the same side of the gender divide, the stark physical differences between them eerily testify to all that David has been through.” page 57

As Nature Made Him: The Boy Who Was Raised As A Girl by John Colapinto.
Harper Perennial, Harper Collins, 2000, my edition 2006.
Nonfiction, 289 pages plus 18 pages of extras.
Not Leveled.

This is the story of an identical twin boy whose botched circumcision altered the course of his life (and many other children) forever.  When his parents desperately sought help, they connected with  researcher John Money, who believed gender was entirely fluid and culturally constructed and who encouraged them to reassign the baby’s sex.  Intact twin Brian was raised in his birth gender, while baby boy Bruce was raised as Brenda.  The results have had a long-term effect on gender theory and treatment of transgender and intersex children in North America. 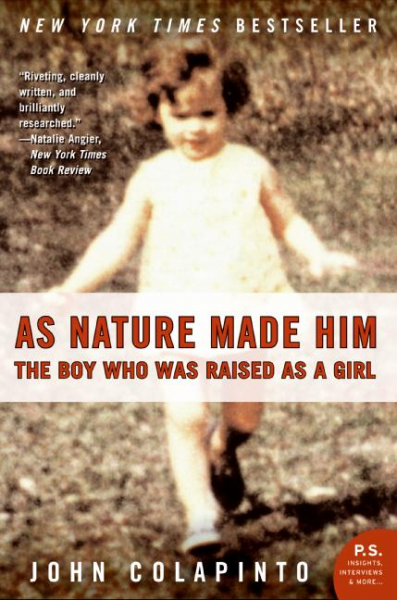 I first read this book not long after the original publication.  As mentioned previously, one of my best friends is trans and recommended this book.  At that time there wasn’t much available for laypeople that was accurate and sensitive – I read other books that were incorrect or difficult, mostly textbooks.  This is now my go-to recommendation for people who are anti-trans, because the medical thriller also contains a great deal of information about trans life and portrays the agony and destruction caused by forcing a person to live as the wrong gender.

As you can guess from that last sentence, the experiment was a total failure.  Brenda was not a girl and couldn’t convincingly fake being one.  Despite a shroud of secrecy over her* birth gender, she consistently affirmed herself as male, behaved as a boy, had masculine interests, and with the onset of puberty, was consistently attracted to girls contrary to Money’s claim that “proper training” would cause Brenda to have a successful life as a wife and mother.

But Money never told the scientific community, choosing to lie about the clinical results and publish information on the famous “twins experiment” which conclusively proved that gender (and sexuality) were malleable and completely shaped by environment, with biology having little to no effect on a person’s gender.

This is patently false.  Both environment and biology shape a person’s experience of their gender and sexuality, and even today we don’t fully understand this relationship.  However, with only one scientist willing to even attempt a rebuttal, the prevailing wisdom in America became infant sex reassignment, which often involved surgical removal of existing genitals for reconstruction.  This caused long-term problems for sexual activity, reproduction, and gender identity for many children.

Meanwhile, Reimer and his family were struggling, experiencing a slow downward spiral of events related to the failed sex reassignment.  They returned to Johns Hopkins for yearly follow-up visits where Dr. Money’s questionable methods included showing the children pornography (Brian for comparison’s sake), conducting lengthy and aggressive interviews, and cherry-picking forced answers for his books and papers.

The Reimers weren’t the only family that Money exploited, and others are mentioned in the book.  But the twin study was his most famous and convincing case.  (Spoiler) Colapinto illustrates the utter hypocrisy of this by summarizing Money’s own dissertation, which finds that children with atypical genitals who were left intact, told the truth, and taught healthy self-esteem were remarkably normal.  Upon puberty, they expressed their preferences and received any needed surgeries.  (End of spoiler)

It’s difficult to write trigger warnings for this book as there are SO MANY potentially triggering things mentioned as part of Money’s research.  Depression, suicide attempts, violence, rape, pedophilia, trans character targeted for attacks, and probably others I’m forgetting.  If you aren’t triggered by reading about mental health, transphobia, or violence, then I would suggest giving this book a try.  Due to the subject matter, I wouldn’t generally recommend this for teens or high school use, but it may be appropriate for some individual students.

This is, to a large degree, the story of a medical establishment that wronged one particular family, but it also includes other viewpoints.  The idea of flexible gender did have some positive ramifications for gender equality and Colapinto explores other reactions beyond his main focus of David’s family.  For this reason, I particularly recommend this book to those who don’t think they know anyone who is trans or come from an anti-trans background.  It is readily available in libraries and used bookstores.  Most popular books seem to look at the MtF journey, and fewer tell FtM or non-binary stories.

* A note on pronouns: In the book, when speaking about life as Brenda, David and his biographer use ‘she.’  I’ve followed this convention in my review.

7 thoughts on “Review: As Nature Made Him”