“I’ve watched Apu at least a dozen times before with Mike and never had this feeling. I never thought it was uproariously funny like some of the kids at school or Mike did, but it never really bothered me either. Or did it, and I just ignored it?” page 127

Samar, or Sam has never known much about her Punjabi heritage and never needed to.  After her father left, her mom cut all contact with her traditional Indian family.  So when her turbaned uncle shows up at the door after 9/11, Sam has no idea who he even is. 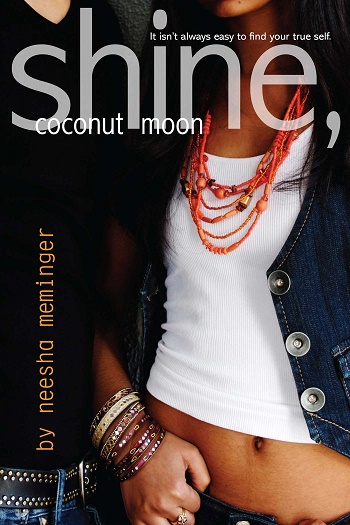 This is a coming-of-age young adult debut novel by an #ownvoice author.  I purchased this book as soon as I read Shenwei’s review.  I work with a number of Sikh and Indian students, and my original thought was to get this for one of my students.

However, after reading, I don’t think it would be suitable for that particular student.  She’s still in middle school, very sheltered, and quite devout.  I don’t think that the violence would be more than she can handle, but I think the underage drinking would bother her and keep her from getting to the parts more relevant to her life.  Perhaps when she is a little older.

There are so many interesting dimensions to this novel (9/11, hate crimes against Sikhs, abusive relationships, interracial friendships, ‘passing’) but at the core, it tells the story of a mother/daughter relationship, and how it’s changing and growing as Sam gets older and discovers an interest in her culture and her mother’s family of origin.  THIS is the sort of story that I wished Everything, Everything was.

At the second chapter I started getting nervous.  Sam and her best friend Molly (who is super-Irish but not in a stereotypical way, thankfully) are drinking, talking about lingerie, and generally acting a bit like teens from a John Green novel.  Remember that Sam is not Sikh herself, and doesn’t yet identify as Indian, because her mom has pushed her to assimilate as much as possible as a way of avoiding violence and prejudice.

This book does such a good job of educating about a few basics of Sikhism and Indian culture.  I am by no means knowledgeable, but did learn a little bit because of having students with this background – so when the five Ks showed up, I cheered.  Since Sam is effectively an outsider in her own culture, we as readers get to learn alongside her as she discovers Sikhism and what it means to be Indian-American.

Meminger is constantly calling out the characters and the reader on their own BS or cultural assumptions.  At one point Sam talks to another student, trying to find some “Indian groups” to explore her identity, and is pointedly told to make some friends, and when she has real friends who are Indian, that will be her group.  Another time Sam has to eat with a group including someone who assaulted her uncle, and is irritated when nobody understands why it bothers her.

Even though Molly was clueless and made poor choices during the book, I was appreciative of the inclusion of this character.  While I never pushed alcohol on my friends, in many other ways I was Molly in high school.  In addition to providing a crucial mirror for Sikh and Indian teens, especially those who are questioning their identity, this book also provides a road map for privileged teens who want to open their eyes and become allies.

There also is a minor point.  Meminger also included an African-American character who is pretty much the stereotypical “mean girl”, superficial, obsessed with boys and parties, rich and privileged.  We eventually see her character develop beyond this one-note portrayal that Sam initially tells us, but I was delighted to see this inclusion (just as I was happy that the main villain of Save Me a Seat is Indian-American).

Why is this portrayal of a vapid, social butterfly black teen important?  So that minority children and teens don’t feel that they always have to be a model or exemplar of their racial or religious group, but are also able to see themselves in other spaces and feel that it’s okay to be an angry, superficial, or damaged person.  It’s not all about “overcoming” blackness (or gayness or disability or whatever marginalized group).  This novel teaches us about being who you are, which includes your origins.  And even the rich socialite minor character was able to display some depth and development.

Shenwei does a great job of summarizing one of my favorite aspects:

“One of the great things about this book is that it pulls in so many relevant and important issues. It touches on Japanese American incarceration during World War II as it relates to present-day Islamophobia (though it uses the word “internment,” which is problematic), criticizes stereotypical media representation like Apu from The Simpsons, and explicitly addresses colorism in Indian and South Asian communities. Notably, it points out that distinguishing between Sikhs and Muslims shouldn’t be done as an attempt to “opt out” of the Islamophobic violence while leaving Muslims to take all the hits.”  Review for Shine, Coconut Moon, March 6th, 2017.

This novel would be great in a historical fiction rotation to use when studying 9/11 (I know it’s recent to most of us, but to the kids these days learn it in a history unit).  The author has discussion questions available for educators and book clubs.

If you are able to, I would highly recommend that you visit a gurdwara, meet local Sikhs, and learn about the differences between Sikhs and Muslims.  Two resources before your visit are SikhiWiki and this article on respectfully visiting a Sikh temple.  For more information, several of the sites that Samar uses to research are still up and running as I write this review.

This book is definitely recommended for teens and adults.  Due to the underage drinking, violence, swearing, and sexualized behaviors, it might be appropriate for some middle school students but not all.