Just one big caveat before using this early reader in a school library or classroom.

This is a nonfiction early reader about the life of Ruby Bridges, written by her. This book covers her historic integration of the William Frantz Elementary School in Louisiana, as well as some information about reactions to the integration and her later life (particularly a reunion with her teacher).

It’s not entirely clear whether she wrote an entirely new book or simplified her book In My Eyes for a younger reading audience, however she is attributed with both the text and the photo compilation, so until I read the other book, I’m going to assume these are two separate works. 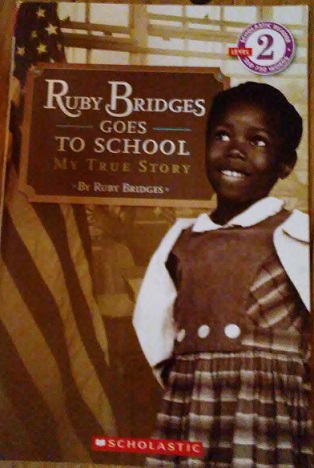 Most of the children’s non-fiction books about African-American history tend to be aimed at second grade on up.  There are, of course, many picture books intended to be read aloud by an adult, but most of the basic early readers are predominately white.  This sets up the disturbing standard of the “white default” early in life.

A Digression about Early Readers: Early readers or pre-readers are a type of children’s book which use small amounts of a simple text heavily supported by pictures and repetition.  They are, most likely, the first thing your child will ever independently read although some children do memorize favorite read-alouds before this stage of literacy.  Early readers are for children who know the alphabet and the basic consonant and vowel sounds.  They may know some blends (sounds made by letter combinations such as “th” “sch” “bl” or “ng”) as well.  It is quite difficult to find really good early readers in general, let alone any featuring people of color.  Fiction early readers are more prevalent than non-fiction, although the availability of non-fiction early readers is growing. Children may begin reading these anywhere from age 3 to 2nd grade.  They begin with a full page picture and a simple, repetitive sentence with lots of support from the picture, such as “Here is the dirt.” “Here is the rain.”  Children then gradually transition to less repetitive but still simple sentences.  “Here is the snow.”  “The wheel will not go.”  They begin using strategies to determine the word as pictures are no longer so obvious (tire/wheel), using blends and occasionally more complex sentence structure “Now there is snow.”  “She wants the truck, not the doll.”  They gradually progress up to multiple sentences per page and more complicated sentences and vocabulary. /digression

This book is at the higher side of beginning readers.  While there are at most six sentences to a page (most pages have two), the vocabulary doesn’t hold back, featuring words like neighborhood, segregation, and government.  There are repetitive sentences in a few places (“I liked my school.  I liked my teacher.  I liked my friends.”) but the majority of the book is new to the reader.  The pictures don’t necessarily help children decipher the words, which is another clue that this is intended for late first grade/second grade readers.

This book is a welcome addition to the world of early readers, where not only are people of color rare, but also historical non-fiction about people of color is very, very challenging to find at this level (unless it’s Dr. Martin Luther King, Jr. or Harriet Tubman)

Even white students could connect with the real experiences that Ruby Bridges went through at their age, and it’s so cool that she took the time out to write an early reader (not an easy task).  The longer sentences were broken up nicely into segments, and most pages had plenty of white space to aid the early reader.

I also really liked that there were real historical photographs in the book.  My students are so often drawn to books with photographs, and it helps them distinguish that this book is a work of non-fiction.  However, there was one problem with the photographs, which is this one on the right:

While many students will be unable to read the sign or uninterested in what it says, a good number will be interested and curious.   The more advanced readers in a group are likely to try to sound out the words on this sign.  In doing so, they may bring language and discussion into the classroom that many 4-7 year olds simply aren’t ready for yet.

I was really torn in my reaction to the inclusion of this photo.  On one side, I don’t believe in whitewashing history.  This is a factual thing that happened, and it’s important for children to learn about the harsh realities of segregation.  Ruby Bridges was a first grader when she was confronted with this sign and many other signs, words, and actions that were the same or worse.  How can we argue that a first grader shouldn’t read this sign when another first grader was confronted with far worse?

On the other side, in our society today, I don’t see this sign as being appropriate for such young children to read without guidance, and in an early reader there is no room for context.  There is a place for innocence, and as parents and teachers, we are guardians of our children’s innocence.  Additionally, this word may be a trigger for some, which is why I haven’t read it aloud yet (as I know some children it could potentially disturb).

At the end of the day, I think parents and teachers know their children best.  If you feel your child will gloss right over the text in these pictures, or if you know your child has experienced this type of language before and won’t be phased by it, then go right ahead.  I really wish I could wholeheartedly recommend this work.